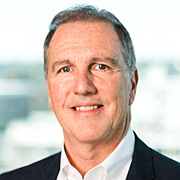 As the CEO for MMA’s Sioux Falls and Fargo offices, Steve Vlk oversees a team of more than 180 employees who are there in the moments that matter for nearly 7,000 business insurance, employee health & benefits, and private client services clients.

After a long and distinguished career with three major insurance carriers, Steve started Vlk Consulting Group in partnership with Howalt+McDowell Insurance, which was acquired by Marsh & McLennan Agency in 2012. Steve then served as vice president of the employee benefits division before being promoted to CEO of the Sioux Falls office in 2018 and Fargo in 2019.

Steve’s greatest passion is developing the talent and culture of MMA because he believes investing in MMA’s team benefits how clients are served. This passion has led him to serve as co-chair for MMA’s national Diversity & Inclusion committee. He is also committed to maintaining the local touch that differentiates MMA from our competitors while relentlessly pursuing best-in-class solutions.

Steve earned his bachelor’s degree in marketing and finance from Northern State University.