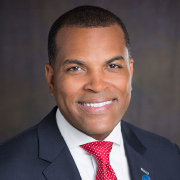 Donnell R. White is chief diversity officer and director of strategic partnerships for TCF National Bank. He previously served in the same role at Chemical Bank since June 2018.

Prior to joining Chemical Bank, Mr. White served as executive director of the Detroit Branch National Association for the Advancement of Colored People (NAACP), where he helped lead the organization’s largest local Branch – also one of its oldest and most storied Branches. While there, he was responsible for the strategic, financial and operational oversight of the organization and also served as the spokesperson and community liaison for the organization.

Donnell is active in the community serving as a founding member of New York University’s Brennan Center for Justice Law Enforcement Signatory Group. He also serves as a board member of ClearCorps Detroit, Arab American and Chaldean Council, and Crime Stoppers of Michigan. In addition, he serves on the Federal Bureau of Investigations Multicultural Advisory Committee, Wayne State University President’s Community Advisory Group, and Focus Hope Advisory Group. He is Board Trustee for Michigan Children’s Foundation, the Detroit Symphony Orchestra and Detroit Public Safety Foundation.