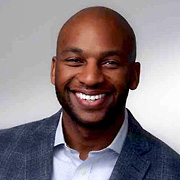 DeAndre is the Vice President & Regional GM for the western US in the middle market segment within the global commercial payments organization. He and his staff work tirelessly with the account development organization to maintain and grow more than $10B in annual CV, while continuing to add an additional $2B YoY. DeAndre joined American Express in April of 2014 as an Executive Director in the Large Market Client Group. In this role, he lead the growth segment for the state of Texas and surrounding markets through an exciting time of change. He rebuilt and repositioned the focus of the team to drive long term growth and profitability while managing to the p&l and risk in a volatile market. Prior to joining American Express, DeAndre held several regional and national leadership roles across marketing, strategy and sales at Capital One N.A. He was instrumental in its growth as the company acquired several banks and navigated an enormous amount of change over an 8 year span.

DeAndre is known as a fearless and inspiring thought leader that creates change rather than waiting on it. He’s an advocate of diversity and works closely with several organizations such as the National Diversity Council, National Black MBA Association and the National Society of Hispanic MBA. He is also the executive sponsor of the Black Employee Network’s Texas chapter at American Express.

DeAndre lives in Phoenix with his wife Amy and their three daughters where he enjoys playing golf, cross training and spending time with the family.