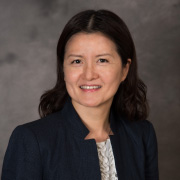 Amy Lee is senior vice president, global human resources of Las Vegas Sands Corp. (LVS). She assumed that role in August 2016 after serving in a variety of leadership positions since joining the company in September 2013. Las Vegas Sands Corp. is a Fortune 500 company and the global preeminent developer and operator of world-class Integrated Resorts that feature luxury hotels; best-inclass gaming; retail; dining and entertainment; Meetings, Incentives, Conferences and Exhibitions (MICE) facilities, and many other business and leisure amenities. The company currently owns and operates Integrated Resorts in Asia and the United States, including Venetian | Palazzo in Las Vegas, Sands Expo and Convention Center in Las Vegas, Marina Bay Sands in Singapore, Venetian Macao, Sands Cotai Central in Macao, the Four Seasons Hotel Macao, and the Parisian Macao which was just opened last September.

Prior to joining the company, Ms. Lee held executive roles in Compensation, Benefits, and HRIS in multiple industries, including hospitality. She has gained experience across a number of west coast based companies such as Powerwave Technologies, Inc. where she was Senior Director of Global Compensation, Benefits and HRIS, and Hilton Worldwide Corporate Headquarters where she was responsible for base and executive compensation.

Originally from Shanghai, China, Ms. Lee provides a unique background with experience having supported employees in Asia, South America and Europe as well as in the United States. Her global perspective and professional experiences make her a great asset to the company’s overall success.